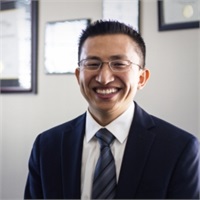 When John started a real estate investment company with his younger brother in 2003, he quickly realized the importance of being financially competent and resourceful. Two years later, while still a business student at the California State University, Fullerton, he began his career in financial services, founded his own practice and grew it into what it is today.

John got his insurance and securities licenses in Cerritos, California in 2005 and became an independent financial adviser with the help of great mentors he met through volunteering. Thereafter, with his early successes by 2007, he was able to retire and support his parents, relocated to a larger office in Orange County, and at the same time, expanded his firm’s services to include fiduciary investment services, tax planning and holistic financial planning. To date, the firm is a successful relationship and referred-based practice that has been consistently grown year over year.

John is an Enrolled Agent (federally authorized tax practitioner, this is the highest credential the IRS awards) and a CFP (Certified Financial Planner), who’s also fully licensed with a clear record of no complaints or regulatory issues: insurances (Life & Health and Property & Casualty) and securities (FINRA Series 6, 7, 26, 63, 65).

Before John was in the financial services industry, he always had a passion for service and volunteerism. He founded the Key Club International Club at Oxford Academy in 10th grade and in 2003, he founded Youth Leadership America (YLA), a continually growing non-profit 501(c)3 organization that provides opportunities for high school students to learn leadership in the community. In addition to all these accomplishments, John has been a Member of the Kiwanis Club of Greater Anaheim since 2003, served two full terms on the Anaheim Sister City Commission (2009-15) as Chairman, and two full terms on the Orange County Juvenile Justice Commission (2007-15) as the Law Enforcement Committee Chair.

In his profession, John has been active with the Orange County Financial Planning Association since 2012, where he serves on the membership and the pro-bono committee. John is a natural public speaker and loves to share his expertise at various community and professional events/conferences. He enjoys leading study groups and doing various financial planning workshops.

Though with his full calendar, John still prioritizes his time for his faith and family above all, as he has learned that service/charity and his faith practice begins at home! After he got married to the love of his life, Michelle, on his birthday in 2015, John began cutting back on his community involvements to focus more on his own family. John and Michelle are very blessed to have two great children, a daughter and a son.